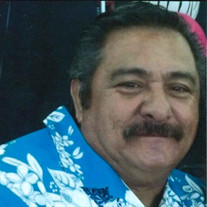 Celebrating the life of Clarence "Baldy" Kaupua Preston Sr. Born on November 3, 1952 in Kahuku, Oahu, Hawaii to Mr and Mrs Robert and Elizabeth Preston, Sr. He was the 7th of 11 children. He attended Hauula Elementary School and Kahuku High School where he graduated in 1971. After graduating from High School, he began a career as a mover/packer for Y. Higa Trucking for approximately 5 years before going to work for the State of Hawaii- Department of Transportation, Highways Division. He retired form the State in August of 2018 after serving 40 years with the division. He retired as the District Superintendent for the DOT. Baldy lived most of his life in Hauula with his parents and 11 siblings before moving to Kahuku in 1983 and purchasing his home there with his wife, Nadean. They have lived there ever since raising their 5 children-'Ilima, Patricia, Boy, Kainoa and Pua'ala. He married his childhood sweetheart on August 19, 1972 at the Greater Mt. Zion Church in Punaluu with just their good friends as witnesses. Everyone knows his catch phrase of "Lose Money" whenever something didn't go right or when his adult children, mainly the eldest, would ask, "whats for dinner dad?" Oh boy...He always used to tell others that "Respect is a 2-way street".This is true because in order to be respected or treated with respect, you need to show respect. That saying will take you places in life that is more than you'd expect. One of the people he respected a lot was his older brother Vance a.k.a. "Toe", because he was always with him working on cars, or running errands, or getting "lickens" when he never listen. He was involved with Bowling Leagues most of his adult life. A few of his children were bowling alley babies because they'd take them with them every Friday and Sundays night's to Kam Bowl, Pali Lanes, Kanoehe Bowling Alley and others. He also loved coaching and being an umpire. He's coached and umpired in the PAL, High School and community leagues of baseball, softball and mountain ball. He also played in some of the community leagues. He was also an Awesome chaperone for the Hauula Elementary School classes that went on school trips to the Big Island, to Disneyland and to Waikiki for Career Fair. The teacher and students like him because he would watch the "naughty" kids, be the food pick up guy and sometimes even the tour guide because he knew the streets like the back of his hand. He loved spending time with his family, especially his grandchildren, they were his joy in life as he got older and mellowed out a bit. He and Nadean were strict parents, but a very lenient grandpa and grandma. They loved going to the beach on Sunday for family day every month. They loved traveling. They'd go to the neighbor islands, Las Vegas, Reno and other places on the mainland visiting family every year. One of those trips were spent on a Cruise Ship in Alaska. Family trips were one of his most joyous occasion in life that he enjoyed a lot, especially when the kids and grandkids were having lots of fun. Besides bowling, he also loved singing, he used to get audiences from the police officers that would come over because there was a noise complaint called in. They would just sit out on the porch and listen until someone would go outside. He would sing! He also followed in the Kaanaana Family Tradition of playing cards every chance he got. He'd play trumps, rummy, sakuda, solitaire, speed and we cannot forget "Paiute" (ugh! says the baby of the family...LOL). He loved listening to all types of music, but his favorite were The Oldies But Goodies" and old Hawaiian. Baldy was a hard worker who did his best to provide for his family. He had a big heart and would help people whenever he could in any way he could. He was a good coach and mentor. He was a jack of all trades type of guy that would fix anything and sometimes became a hoarder because he never like throw a part away, in case he needed it...too funny that guy. He was also a jokester, he liked making people laugh. He was also a really good cook-he made the best laulau and Hawaiian food ever. We know he in the Heavens watching down on us all. WE LOVE YOU AND WE WILL MISS YOU.

Celebrating the life of Clarence "Baldy" Kaupua Preston Sr. Born on November 3, 1952 in Kahuku, Oahu, Hawaii to Mr and Mrs Robert and Elizabeth Preston, Sr. He was the 7th of 11 children. He attended Hauula Elementary School and Kahuku High... View Obituary & Service Information

The family of Clarence Preston Sr created this Life Tributes page to make it easy to share your memories.