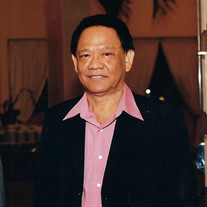 Eliseo Hernandez Ildefonso, age 73, passed away peacefully on Saturday, September 19th, 2020, in his home in Aiea. He was born January 22, 1947, in San Nicolas, Ilocos Norte, Philippines, to parents Vicente Nacorra Ildefonso and Victoria Hernandez Ildefonso. A graduate of Ilocos Norte High School, he was a school teacher in the Philippines. When he immigrated to Hawaii in the 70s with his new wife, he went on to attain an Associates Degree from Leeward Community and Honolulu Community College in trade courses spanning welding, plumbing, machining and electrical. He worked at C&H Sugar as a general mechanic, then worked at Gaspro and would eventually work at, and retire from, the Hilton Hawaiian Village as a Maintenance Engineer. His other passion was as a landlord owning multiple houses. And would act as his own handyman fixing any problems his tenants had, himself. He never stopped working. His hobby was working. A loving father, son, grandfather, brother, husband, uncle, cousin and companion. He sacrificed to give his family what he did not have. He was a fine example of how to live one’s life. He will be forever in the hearts of all those who were privileged to know him. He is survived in love and remembrance by his two sons, Andrew and Tyler, grandson Finley, ex-wife Angeles, companion Sally, and siblings - Ernesto, Florendo, Gloria, Angela, Estrella and Julius. Private services to be held.

The family of Eliseo Hernandez Ildefonso created this Life Tributes page to make it easy to share your memories.