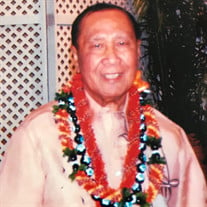 Ernesto “Erning” Julian, 86, passed away on October 28, 2018 at Queen's Medical Center in Honolulu. He was born on May 16, 1932, in Laoag City, Ilocos Norte, Philippines to the late Lorenzo and Semona Julian. He and his lovely wife, Germana, were married for 62 years. He moved his family to Honolulu in March 28, 1969. He worked at Mid-Pac Lumber and retired after 30 years of service. Erning loved being involved in the Filipino community. He was a member of the Dingras Association, Filipino Catholic Club, and United Laoaguenos. He served as Vice President of the Piddig Association and President of the Sarrat Association of Hawaii. He was a proud owner of his residence at Miller Terrace and served as the Homeowner’s Association President for over 20 years. Erning is survived by his wife, Germana “Maning” Julian; children, Emelyn Lutzker of Riverside, CA, Nelson (Alison) Julian of Petaluma, CA, Imelda (Anthony) Saglembeni of Monument, CO, and Mary Ann (Stewart) Forney of Orlinda, TN; 8 grandchildren, 2 great-grandchildren; siblings, Prudencio (Ising) Julian of the Philippines; Loreto (Tarcila) Julian of Maui; Concepcion Matute of the Philippines; and Domingo (Alice) Julian of Maui. Visitation will be held at Hawaiian Memorial Park Mortuary on Thursday, December 6, 2018, from 5:30 – 9:00 p.m., with a wake service to begin at 6:30 p.m. On Friday, December 7, 2018, visitation will be held from 10:00 – 10:30 a.m., with a funeral Mass at 11:00 a.m. at the Co-Cathedral of St. Theresa; burial will follow 12:30 p.m. at the Valley of the Temples Memorial Park.

The family of Ernesto "Erning" Julian Julian created this Life Tributes page to make it easy to share your memories.