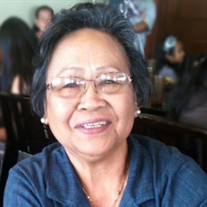 Our Beloved Mother, Grandmother, and Great-Grandmother Felicitas Legaspi Duclayan passed away January 28, 2021 with her family by her side. The oldest daughter of the late Marcelino Legaspi and the late Teodora Ajolo, Felicitas was born on August 6, 1940 in San Fernando, La Union, Philippines. She graduated from Bohol Central College in Manila, Philippines and shortly after married the late Ponciano Duclayan on January 17, 1960, fulfilled her dream of immigrating to America - Honolulu, Hawaii, where they built a prosperous life together and raised their family for 36 years. She pursued trade work as a seamstress, briefly ventured as a business owner, but ultimately found stability with the State of Hawaii, where she retired after 20+ years of service and soon after relocated to Las Vegas, Nevada to be closer to her children and grandchildren. She is survived by her daughters, Aileen Coursey, Dinah Chambers and Charlene Bradford, along with her grandchildren, Archie Chambers II, Simone Killingsworth, Craig Agcaoili, Nohelani Yamasta, Dylan Leslie, Chelsea McColl, Cassidy Aguirre, Ethan Bradford and her only great-grandchild Kohana Yamasta. Felicitas, also known as “Dianang” to her siblings, was a loving sister to the late Macrina Rivera, Herminio Flores, Isidro Flores, the late Cirila Cargo, the late Cecilia Quirimit, Anselma Marin, the late Catalino Legaspi, Virginia Duclayan and Cesar Wilson Legaspi. Wake service will be held on Monday, March 8, 2021, from 5pm – 8pm HST with a Eulogy service 6:30pm HST, at Valley of the Temples, Kaneohe, HI. Burial Services to follow on Tuesday, March 9, 2021 at 12pm HST. Due to the State of Hawaii COVID-19 restrictions, both services are private. However, services will be available via livestream by Funeral Vue. Please request livestream link from the children at [email protected] The family appreciates the kind generosity from those who have expressed their thoughts and prayers. Any expressions of condolence: flowers can be received by Valley of the Temples no later than 2pm Monday, March 8th, or donations can be addressed to: The family of Felicitas Duclayan; C/O Craig Agcaoili 9303 Gilcrease Avenue, Unit 1108 Las Vegas, Nevada 89149

Our Beloved Mother, Grandmother, and Great-Grandmother Felicitas Legaspi Duclayan passed away January 28, 2021 with her family by her side. The oldest daughter of the late Marcelino Legaspi and the late Teodora Ajolo, Felicitas was born on August... View Obituary & Service Information

The family of Felicitas Duclayan created this Life Tributes page to make it easy to share your memories.