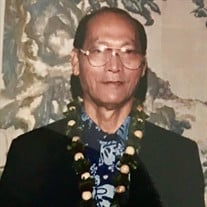 Born on December 16, 1929 in Barangay 7 (Alejo), Vintar, Ilocos Norte, to a lovely couple, Pedro Dela Cruz and Forencia Gamiao, Felix Gamiao Dela Cruz was a man of wisdom who lived a remarkable life. He married his high school sweetheart, Romula Benigno Dela Cruz, and started their family during their college days. EDUCATION. Mr. Dela Cruz believed in the power of education as he continued his college education after having a few kids. He finished an associate degree in education and began teaching shortly thereafter. He always advised his grandchildren to study hard in school. You can always hear him saying, “The more you learn, the more you know. The more you know, the farther you go.” HARD WORK. One of the greatest lessons he taught his children and grandchildren is the value of hard work regardless of what you do for a living. In the Philippines, he became an insurance consultant and underwriter with Filipinas Life Insurance Company for a few years helping his group achieve top sales. He was also a remarkable public servant, as a barangay councilman and captain. In addition, Mr. Dela Cruz gained many skills throughout his life as a farmer, municipal clerk, and police officer. He was a janitor, a dishwasher, a busboy, a bird feeder, maintenance worker, and pest controller. He believed so much in the value of hard work that he retired at age 71 because his employer loved working with him and asked him to work another year. THE AMERICAN DREAM. One of Mr. Dela Cruz’s greatest accomplishments is bringing his entire family to the United States beginning on on March 18, 1978, where he believed so much in the “American dream.” With the help of his loved ones, he was able to purchase a home in Honolulu, Hawaii. He didn’t have the grandest ambitions, but his goal was the most noble, that is to see his family given the opportunities to achieve their dreams in the United States. FAITH AND FAMILY. Perhaps his great accomplishment is bring his family closer to God, ensuring that his family would come to know Jesus Christ. He helped build a church in his hometown in Parut, The Four Square Gospel Church, donating his family’s property and co-funding its development. He always advised his children and grandchildren to go to church, read the bible, and pray. The legacy of Mr. Dela Cruz is not in his material accomplishments but in his Christian family. He is a man of integrity, love, and faith. Please click on link to view service: http://webcast.funeralvue.com/events/viewer/40384

The family of Felix Dela Cruz created this Life Tributes page to make it easy to share your memories.