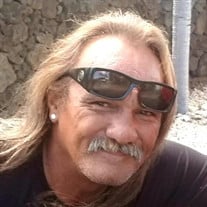 Glenn “Baba” William Rex I’i The Waianae community has lost a warrior brother with the untimely passing of well known “Baba” I’i. Born Glenn William Rex I’i, December 12, 1959, he was sent to an early grave on June 22, 2020 at the hand of a misguided family member and her boyfriend. May God’s justice prevail. Of mostly Hawaiian decent, he braved a life full of ravaging set-backs that few could endure. He was tall in stature at an early age, came from a large family, and was mostly raised in the housing tract known as Coral Sands in the 70’s. After graduating from Waianae High, class of ‘77, he learned the hard way that adult life was not often fair, and that he would be left to fight his way through hardship after hardship, haunted by a past he would never escape. But he emerged a victor, a conqueror, in this one simple fact: he never lost is tremendous capacity to love! He was respected and adored by all who met him in his later years. His heart was full of giving to whoever asked. His hands were strong and always willing to help cook, build, fix, and give comfort. His ruggedly handsome looks were of legend, his smile and youthful laugh, warm and hearty. His relationships were rocky, but his dedication to each and every woman who loved him was strong. Although he walked burdened with many sorrows and pain, his head was held high, a simple but commanding greatness achieved by few. The best man he could possibly be, he was ever proud to be a loving father and a Hawaiian! He was preceded in death by his mother Audrey U’ilani I’i, brothers Carl Peeples and Kalani Peeples. His surviving siblings are: Sharonlee Anderson; Charmaine Caminos; Geneiva I’i; Jury I’i; Glenda Luna; Glenn Rex I’i Jr.; Thomas I’i; Brenda Abaro; William Aku I’i; Clifford I’i Sr.; and Brent I’i. He is survived by twelve children: Rex I’i-Lester; Kelebb Abellanosa; Rainee Abellanosa; Moses Sampaga; Joy Sampaga; Israel Sampaga; Kealohapauolepualani Kepo’o; Hokulani Kepo’o; Tiani Beaman; Kekoa I’i; Keanu I’i; and Keala I’i, along with a handful of grandchildren. His celebration of life is being coordinated by the family, tentatively scheduled for August 2020. For more information, contact his beloved cousin at Ginai Hill on FB.

The family of Glenn William Rex I'i created this Life Tributes page to make it easy to share your memories.

The Waianae community has lost...