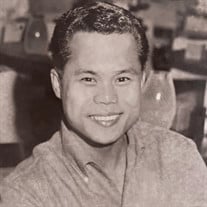 Gobersido Miguel passed away peacefully on November 1, 2021, at the age of 86. Also affectionately known as, “Sid” or “Uncle Sid”, he was the third youngest of nine children born to Francisco Mariano Miguel and Petra Aseret Baquiran on January 13, 1935, in Paukaa, a plantation village in North Hilo, Hawai’i. Sid resided in Hilo in his early childhood and in the Philippines during his youth before returning to Hawai’i in 1957 where he lived in Honolulu and worked for the hospitality industry. He retired from the Waikiki Reef Hotels as head bellman. Sid was preceded in death by his wife, Maxima Pascua, his parents, his brothers John and Crescenciano, and his sisters Evelyn Gaoiran, Persiveranda Mariano, and Ilena Andres. Sid is survived by his sons, Tilden, Derwin and Sherwin, daughters-in-law Luz Banez and Juanita Arriesgado, grandchildren Tiara Christa, Tilden-Christen, Leilani and Shaun Keona, and his sisters Tomasa Ajolo, Rosalia Gaoiran and Florence Plan. Sid is further survived by many nieces, nephews, relatives, and friends. Upon his return to Hawai’i, Sid worked alongside his brother John, sister Evelyn and their spouses to help their siblings and their families return to the United States and resettle in Hawai’i. Sid carried on with his generosity working with his wife to also help their extended family in the Philippines. He accomplished this on a humble salary helping his family while raising three young sons. Sid enjoyed his retirement by taking daily, leisure walks at Ala Moana Beach Park where he met and chatted with friends. He tended to his property and his flock of birds in Kalihi, entertained his buddies, and spent many afternoons watching Korean and Filipino dramas while enjoying savory pupus and cool swigs of beer. Private services will be held at the Valley of The Temples Memorial Park Mortuary and Cemetery, in Kaneohe, Oahu.

The family of Gobersido Miguel created this Life Tributes page to make it easy to share your memories.