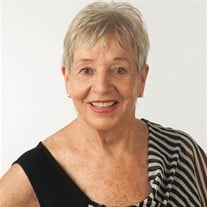 Grace Helen Blodgett, 79, of Kaneohe, HI, passed away on January 17, 2019 in Kaneohe. Public viewing will be on January 26, 2020 starting at 12pm with funeral services following at 1:00pm at the Trousdale Chapel at the Valley of the Temple Memorial Park with the Reverend Giovan King of St. Christopher's Episcopal Church, officiating. Burial will follow at 2:00pm at Valley of the Temple. Grace was born in Romford, Essex, England to Mary and John McCarthy on April 6, 1940. She married Peter H. Blodgett on June 28 1975 at St John’s Episcopal Church in Passaic, New Jersey. She trained and worked as a nurse for the Royal London Hospital before moving to the United States and working in New York, and Utah, eventually becoming the Director of Nursing at Holy Cross Hospital in Salt Lake City. She later moved to Honolulu with her family and started the University of Phoenix, Hawaii Campus with the nursing program being the first program to get started in Honolulu with 12 nursing students. She received her RN, BSN, MSN and MBA and then later her Phd in Human Sexuality and was known to everyone as “Dr. Gracie” as she threw her passion into sexual counseling and writing her book “Understanding Patients’ Sexual Problems”. She received the 1989 Excellence in Nursing Award, the 1989 Utah Humanitarian Award, the 2005 Hawaii Nurse Executive Award, and former Hawaii Governor Linda Lingle declared September 19th as Dr Grace Blodgett Day. Grace is preceded in death by her parents Mary and John; brothers Johnny, Pop (Arthur), Benny; and her sister Mary. Grace is survived by Husband, Peter, Sons Mark (wife Gina), Paul, daughter Kate (husband Jason), and youngest son Jonathan. She is also survived by her younger brother Brian (wife Bernadette). Grace is also survived by her six grand-daughters Gillian, Avery, Maysea, India, Isabelle and Lilly. In lieu of flowers, donations can be sent to Alzheimer’s Association at http://act.alz.org/goto/drgracie

Grace Helen Blodgett, 79, of Kaneohe, HI, passed away on January 17, 2019 in Kaneohe. Public viewing will be on January 26, 2020 starting at 12pm with funeral services following at 1:00pm at the Trousdale Chapel at the Valley of the Temple... View Obituary & Service Information

The family of Grace Helen Blodgett created this Life Tributes page to make it easy to share your memories.

Grace Helen Blodgett, 79, of Kaneohe, HI, passed away on January...