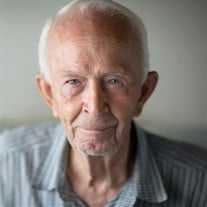 Captain Harold C. Rideout Jr. April 15, 1920 - June 10, 2019 Harold was born to Harold Cushing Rideout, Sr. and Phoebe Nutting Rideout in Ashburnham, MA, and was the youngest of five siblings. He graduated from Cushing Academy in 1939, and enlisted in the Army Air Corps in 1941, where he graduated as a fighter pilot the following year. He was part of the 57th FG in the Egypt-Libya campaign when he was shot down during a bomber escort mission. He was captured and held at the POW Camp PG 21 in Chieti, Italy before escaping with his friend, Claude Weaver III (RCAF, youngest Allied Ace in WW2). They travelled through 150 miles of enemy territory before joining the British 8th Army. After World War II, Harold owned and operated a flight school with his wife Patricia Houran Rideout in New York. He had three children with Patricia: Shelley, Bowen, and Lynn. The family moved West, and they eventually settled in Sebastopol, CA. Harold worked for military contracts in surveying and construction, which required him to travel throughout the US and Vietnam. His work led him to Hawaii, where he eventually met Elena Arciaga Rideout. They married and had three boys: Allen, Aaron, and David. After retiring, Harold operated a solar business, and mostly supported the family as a stay-at-home dad. He had the habit of taking home strays (both animals and humans) and kept busy with various home improvement, automotive, and church projects. He was a loving dad, a caring friend to those around him, a veteran and a true patriot. We will miss his New England wit, kind heart, and generosity. He is preceded in death by his wife Elena Arciaga Rideout, his daughter Shelley Lucille Rideout, his older sister Jenny Ruth Stein, his older brother Percy Adams Rideout, his older brother Granville Nutting Rideout, and his older sister Annette Ward Rideout Clark. He is survived by his son, Bowen D. Rideout of Ft. Jones, CA, his daughter Lynn Rideout of Guerneville, CA, Allen Clyde Kenneth Rideout of Honolulu, HI, Aaron Frank Rideout of Honolulu, HI, son David Francisco Cushing Rideout, of San Mateo, CA, daughter-in-law Bianca Wong Rideout of San Mateo, CA, and his grandson Stephen Wright. Arrangements by: Hawaiian Memorial Park Mortuary 47-200 Kahekili Hwy. Kaneohe, HI 96744 808-247-0437

Captain Harold C. Rideout Jr. April 15, 1920 - June 10, 2019 Harold was born to Harold Cushing Rideout, Sr. and Phoebe Nutting Rideout in Ashburnham, MA, and was the youngest of five siblings. He graduated from Cushing Academy in 1939, and... View Obituary & Service Information

The family of Harold Cushing Rideout Jr. created this Life Tributes page to make it easy to share your memories.