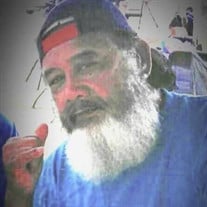 69, Joseph Kanehoa Adams Jr. (Papa Joe), passed away on Wednesday, August 15, 2018. He was born on the beautiful island of Oahu on November 12, 1948. He was born to parents Joseph Kanehoa Adams Sr. and Mary Naone. Joseph was the second oldest of 7 children. He attended school up until the High School years. After High School, he joined the military where he served in the United States Air Force for 21 years as an Aircraft Mechanic and retired at the rank of Technical Sergeant. After military service Joseph went to work for the city at The Bus company, where he worked as a Diesel Mechanic. Joseph was a loving husband, father, grandfather, brother and a soon to be great grandfather, He was a very hardworking man always moving never able to sit and be still for even a second. Joseph will always be remembered as a “one of a kind” guy, who always poses for a picture with a shaka, the guy down the lane who is always working on cars and leaving his radio on all night playing Hawaiian music. He now flies high and free with his parents, siblings and his grandson Jaxscen. Joseph is survived by his loving wife of many years, Rowena I Adams. He is also survived by his children, Daughters: Kimberly-Ann Kehaulani Hawn (Kawai Hawn), Rodlyn Keala O Ku’upua Adams-Daquioag (Jon Daquioag), Joenette Hokulani Adams (Jack Stowe); Son: Joseph Kanehoa Adams III Aka: “Bu”; Grandchildren: Brittany-Ann, Rusty, Kelsey-Ann, Kylie-Ann, Rocky, Kellan-Franics, Jayson, Khaiysn-Joseph, Jaclyn. Joseph's surviving siblings are Isaac Adams (Lisa), Colleen Tilton and Kimo Adams.

The family of Joseph Kanehoa Adams Jr. created this Life Tributes page to make it easy to share your memories.