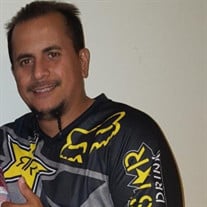 Age 47, of Kaneohe, was born in Honolulu on December 15, 1973, and passed away on January 1, 2021. He was raised in Kalihi Uka and graduated from Farrington high School, class of 1991. He was employed by Straub Hospital from 1991 to 2004 as a Medical Records Clerk. He then became a cement truck operator for Hawaiian Cement in 2004 until he medically retired in July 2020 after 16 years of service. Kape was a gifted mechanic and was well known for being able to repair almost any problem with cars, especially Mustangs and Volkswagens, and custom motorcycles. His outgoing personality and genuine fun-nature drew a lot of people close to him. He was always surrounded by his core of “best friends”, from his early childhood until today—which speaks volumes of the love they all shared for each other over the years. In 2013, Kape was diagnosed with Multiple Myeloma and Amyloidosis, a very rare form of cancer. After his initial diagnosis, Kape was given less than 6 months to live. He was able to outlive all of his life-expectancy prognosis and overcome so many battles along the way. Kape fought his battle with dignity and determination, with his family and dear friends at his side, and even strangers, who came to learn his story. They too, became friends of his as well! He was a beloved husband, father, brother, grandfather, trusted friend, and was loved by so many because of his Aloha Spirit and his charisma. He is survived by his loving wife of 27 years, Chantell; son, Jayce J-Boy Jay-Pedro; daughters, Shawnee (Alika) Ramseyer-Ho and Harlee (Kenai) Jay-Pedro; mom, Marla Lee Pedro; brothers, Michael (Rose) Pedro, Hoku (Marianne) Pedro, and Mo (Harolynn) Pedro; half-brother, Ikaika Waeyenbergh; half-sisters, Tehani Waeyenbergh and Shaye Bermoy; grandchildren, Spencer Rose and Stanton Ramseyer-Ho. Kape’s Celebration of Life will be at Sand Island Beach Park on February 14th, 2021, Sunday, from 1:30pm – 3:30pm (Map to be provided for exact location). We, the Ohana & Friends, will be doing a memorial cruise, open to anyone and everyone, on the morning of February 14th, departing promptly from Sand Island Beach Park at 10am. The memorial cruise will take us into Waikiki, around Diamond Head, through Kahala and then stopping at Sandy Beach (Restroom Break). Then we will continue around Waimanalo, through Kailua, and into Kaneohe, and then back to Sand Island Beach Park for his Celebration of Life Drive –Thru Event. We do have to adhere to the state’s Covid-19 restrictions and we kindly ask all of you who are attending to do so as well. There are so many “Huge Mahalos and Sincere Thank-Yous” to extend to a lot of special people who made a huge impact on Kape’s lifelong journey. Mahalo to the great staff of the Mayo Clinic, Queen’s Hospital, Straub Hospital, and Castle Hospital. A very special Mahalo to Daniel & Keala Sanchez, Makou & Kim Meyer, Bruddah Dave Kellogg & Ohana, Brother-in-laws, James & John Omerod & the entire Omerod Ohana! Special Mahalos to Brandon “Fruit Loops” Yoshikawa, The entire Ramseyer-Ho Ohana, Josiah & Joey Kekoa and their “Volkswagen Crew”, D.A. Customs-Dwayne & Ohana, The Feary Ohana, All of Chantell’s entire ohana, and The Hawaiian Cement Ohana. Special Mahalos to the “Hui” of Damien High School, made up of the dedicated parents of J-boy’s teammates/classmates, and dedicated alumnae.

The family of Kapeliela Pedro created this Life Tributes page to make it easy to share your memories.