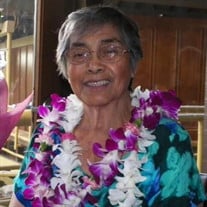 It is with great sadness to share the passing of Loretta Tabin. Hawaiian Memorial Park Mortuary is honored to be serving the Tabin family. Loretta Torrecer Tabin, beloved mother, grandmother, great grandmother, aunt and friend passed away on August 7, 2021 at Queens Medical Center. Loretta was a longtime resident of Kalihi. She was born on March 23, 1932 in Puunene, Maui to Cosme and Maxima Torrecer. She graduated from St. Anthony High School. She loved to swim, even making it to State Swim Competitions for the breast stroke. She met Severino Tabin and they were married until Severino’s passing in 1995. They had two sons, Leonardo and Leopoldo. She worked at Fireman’s Fund for many years and was a loyal and dedicated volunteer at Our Lady of the Mount Catholic Church in Kalihi. Loretta is survived by her son, Leopoldo Tabin, granddaughters, Tiffany Lynch (Casey), Kristina Barayuga (Chester) and Taylor Arroyo-Tabin, and great-grandchildren Isabella Lynch, Chase Barayuga, Magnolia Lynch and Sidney Lynch. She is also survived by her sisters, Dominga Tapat, Sister Consuela Torrecer, Tomasa Chambers, Vicenta Dumling, Pauline Higgins, Filomena Brauner, and many nieces and nephews. She was predeceased by her husband, Severino Tabin and son, Leonardo Tabin. She was also predeceased by her parents, Maxima and Cosme Torrecer, as well as siblings, Rufina Salvador, Ricardo Torrecer, Florida Tacla, Bernadette Torrecer-Jones. Private services will be held at Our Lady of the Mount Church. In lieu of flowers, donations can be made to Our Lady of the Mount Church, 1614 Monte St., Honolulu, HI 96819.

The family of Loretta Tabin created this Life Tributes page to make it easy to share your memories.

It is with great sadness to share the passing of Loretta Tabin....