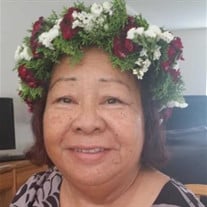 Honolulu, HI – Minaretta Tatupu, a long-time resident of the Waipahu-Ewa-Kapolei area, died Saturday sundown on the 23rd of February at Pali Momi Medical Center in Aiea, HI. Born in 1952 in Utulei, American Samoa to parents Leitu Galufa’atofuileava Talili (father) and To’avalu La’u Fonoti (mother), Minaretta immigrated to O’ahu, HI at the age of 12 years and lived in Kailua. She later moved to Kalihi in which she then attended Farrington High School and graduated with the Class of 1971. After high school, she met the Love of her Life, June Tatupu, in which they later married in March of 1973. She is survived by her husband; her 3 children: Tatupu J.D. Tatupu, James K. Tatupu, and Angela Tatupu-Matavao; and her 7 grandchildren: Tatupu JD Tatupu, Jr., Triton Tatupu, Tyler Tatupu, Timaye Tatupu, Malagamali’i Tatupu-Matavao, Trinity Tatupu, and Talya Tatupu. Motherhood was her favorite career but during her lifetime, she was able to dabble in the work force as a Manager for the Salvation Army and Good Will stores; Assistant Manager at Midas; Secretary to the President of the O’ahu Association for the United Church of Christ; and President of the Parent Teacher’s Association for Farrington High School. In 1991, Minaretta retired her “hat” as a career woman and decided to do what she loved best – a Homemaker. Minaretta would like everyone to know that her work, in this lifetime, is done. She received a call for a position that was quite difficult to refuse. Perks of the position include a timeless sleep filled with peace and love, no more pain and no more sorrow. She will join many other loved ones, who she hasn’t seen for a while, awaiting that GLORIOUS DAY to be reunited with ALL her loved ones. We want to let her know that she did a wonderful and outstanding job as a wife, daughter, sister, mother, and grandmother. We will remember her infectious smile, her glowing warmth, her feisty energy, and her love for the gift of life, the Living God, family and friends. She worked and loved very hard all her life, up until the very end. She made a difference in the lives of many and we will forever be grateful to her for all that she was. We invite you to join us in a Celebration Of Life for Minaretta Tatupu.

The family of Minaretta Tatupu created this Life Tributes page to make it easy to share your memories.

Honolulu, HI – Minaretta Tatupu, a long-time resident of the...