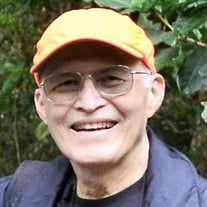 It is with great sadness that we share the passing of Myron Ronald Akana. Hawaiian Memorial Park Mortuary is honored to be serving the Akana family. Myron Ronald Akana, 77, passed away on the morning of Friday, September 3, 2021 at Queen’s West in Ewa Beach. He was the beloved father of one daughter and the proud grandfather of eight. Myron was born in North Kohala, the eldest of seven siblings. His family later moved to O’ahu where he graduated from Kaimuki High School and earned a Bachelor’s in English from the University of Hawai’i, Manoa. Following years of working for the U.S. Postal Service, Myron made the most of his retirement, developing a love for Okinawa that would see him spending months at a time living there. The knowledge he gained was so extensive that he would lead tours for Hawai’i visitors, and his self taught skills in photography were put to good use as he became the official photographer for Churasa, his favorite eisa group, a role he cherished for well over a decade until his death. All this without being Okinawan himself or speaking Japanese. He’d say a friendly smile was all you needed to start a friendship, and many were the friends he made without sharing a common language with them. He was an avid reader and writer and found great pleasure in sending out frequent Okinawa journals, witty, detailed observations on every aspect of life in Okinawa, to not only his family but to his “crew,” the many lifelong friends he made throughout his school years, his work with the postal service, his taiko drumming activities, and his travels to Okinawa. He also provided the opportunity for four of his grandchildren to experience Okinawa with him and had planned on taking the rest of them too as they got older. Now, as we mourn his loss, his favorite Okinawan proverb,“Nankurunaisa,” which means “Things will get better” takes on a deeper meaning. It is a message of encouragement and comfort that he would want us all to remember. His family extends their great thanks to Myron’s crew and to his dedicated caregivers for all the support and love shown to him throughout his decline in health. You were all truly blessings for him as he prepared to leave this world and enter his eternal home. Private services are being arranged.

It is with great sadness that we share the passing of Myron Ronald Akana. Hawaiian Memorial Park Mortuary is honored to be serving the Akana family. Myron Ronald Akana, 77, passed away on the morning of Friday, September 3, 2021 at Queen&#8217;s... View Obituary & Service Information

The family of Myron Ronald Akana created this Life Tributes page to make it easy to share your memories.

It is with great sadness that we share the passing of Myron Ronald...