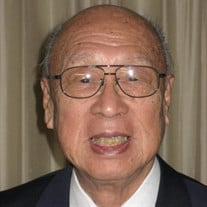 Neuman Yu-Wen Pei, age 100, passed away peacefully on January 23, 2022, with his three sons and family at his side. He was born June 8, 1921 in Hong Kong to Pei Yih Sung and Chen Chu Yin, and was raised and schooled in Shanghai. In March, 1959, he moved his family to Honolulu. For most of his successful career with Universal Corporation, he worked at Universal Motors as Sales Manager, selling Chrysler/Plymouth products. He was also General Manager when the company opened its Pearl City car dealership. He helped Universal receive numerous awards from Chrysler for outstanding sales and service. His career ended as President of the company’s Honolulu Audio & Video, a retailer of Mitsubishi consumer electronic products. His favorite pasttimes were travel, mahjong, and community service, especially within the Chinese community. He was very involved with the Chinese Chamber of Commerce and served as its President in 1978. He was instrumental in the revival and growth of Hawaii Chinese Association and served as President for six years. He was also appointed by the President of the Republic of China in Taiwan as Overseas Chinese Affairs Commissioner in Honolulu. During his long tenure in this position, he chaired and convened three major conventions in Honolulu attended by hundreds of international Chinese delegates. The United Chinese Society honored him in 1992 as Model Father of the Year. Neuman was predeceased by Trevina Wen-Tseng Pei, his beloved wife of 66 years. He will be missed by sons Edward (Gayle), Paul (Selina), and Eugene (Josephine), six grandchildren and four greatgrandsons, and he is also survived by brother Richard (Paula), and sisters Peggy Lam and Grace (George) Young. He will be remembered for his caring and helpful nature, his friendly and outgoing personality, his wit and sense of humor, his contributions to the community, and a loving family who will cherish the wonderful memories of growing up and living with him. Private services were held.

The family of Neuman Pei created this Life Tributes page to make it easy to share your memories.