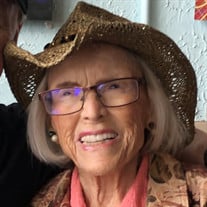 Phyllis Lorraine Hamaker October 23, 1927 - January 24, 2020 Phyllis Lorraine Hamaker, 92, of Hawaii Kai passed away peacefully on January 24, 2020. She is survived by daughter, Jody, daughter-in-law, Joann, grandchildren, Harry, Jessica and Rachel, and great-grandchildren, Harrison, Sydney, Juliet, Ben, Anthony and Lucy. She was born in Detroit, Michigan and graduated from the University of Michigan in 1949 with a Bachelor’s degree in literature. She met her husband, John C. Hamaker, Jr., (Jack) while at the University and they were married in 1947. Jack was a metallurgist and an executive with various steel companies and his work took Jack and Phyllis to many places including Latrobe, Pennsylvania, New Bedford, Massachusetts, Los Angeles, California, and Menlo Park, California. They eventually retired in Hawaii Kai in 1981. Jack and Phyllis were avid golfers for 40 years. During retirement they really enjoyed traveling all over the world together and golfing in many countries. Their marriage lasted 58 years until Jack’s death in 2005. There will be a memorial service and reception at her Hawaii Kai home on Saturday, February 15, 2020, at 4:00 PM.

The family of Phyllis Lorraine Hamaker created this Life Tributes page to make it easy to share your memories.